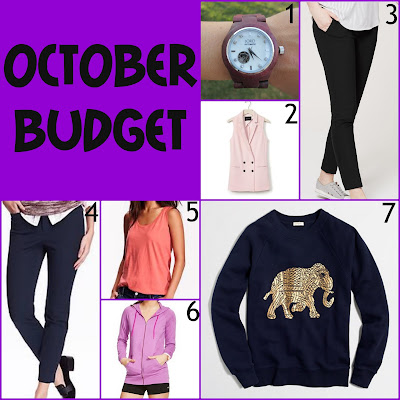 
Pants that fit were at the top of my shopping list this month. While I'm not excited about the cash dropped for the black ankle pants, I know that they will get a lot of wear. The navy ankle pants aren't the best ever, but I have already worn them twice in the two weeks I've had them, so at this rate, I'll be satisfied with the purchase by the end of the calendar year.

The coral tank came in the same order as the navy pants. I was making a habit of wearing tanks with cardigans, and wanted another one to add to the mix. (Apparently I've also made a habit of not taking photos of these outfits.) I randomly found the zip up hoodie on the clearance rack for $8. It may never make its way to the blog because it's lounge wear, but I wanted to include it in the report since it's non-essential. I have already worn it (at least) 8 times, so I'm pleased.

The elephant sweatshirt and the blush sleeveless blazer were both items I bookmarked and kept a close eye on, waiting for them to go on sale. Go figure that they finally did around the same time. I couldn't decide on just one, so I chose both. They're different enough that I felt I didn't have to choose just one.

I've written about my experiences with Le Tote (here and here). I would love for someone to sign up with my referral code (and save $25 off their first month) so I can get $15 off my next month, but even if that happens, I might continue with Le Tote. Even though I spent a lot this month, my shopping pretty much came to a quick halt after I signed up with Le Tote. I think I'd be satisfied spending my clothing budget on Le Tote in lieu of spending it on new goods.

I have a few things still in the mail, including this military jacket and this layered sweater. I bought the jacket in store, but then it was cheaper online a few days later, so I'm waiting for it to arrive before I make my final decision. (The more time that goes by, the less I'm feeling it. But it might just be that I'm getting cranky waiting for it.)

How did you do this month? What kind of goodies did you bring home?

[I'm aware that I'm missing some things in this budget report. I did a terrible job of keeping track of what I bought this month and how much I spent. I'll take the time to figure that for the next budget report and/or I'll be sure to update this one.]