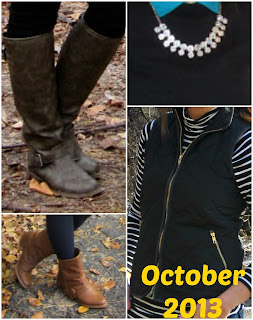 I'm not sure what to say for this rewind. Some good, some medium, and some (one) bad. I guess there are two lessons... don't buy something just because it's "different" (tall booties), and if there are problems with an item before you even wear it, return it (black vest). Especially if it's an item you can easily find elsewhere.
Posted by kate @ a journey in style at 10/31/2015