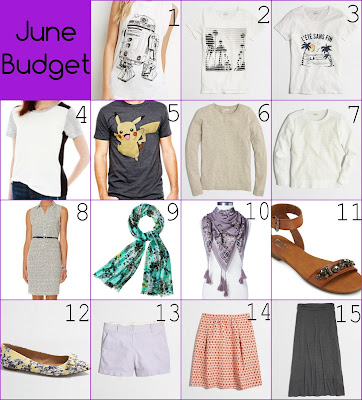 1) R2D2 tank: $16 - It's R2D2. Apart from the Ewoks, R2's my favorite Star Wars character. [EDIT: RETURNED]
2) JCF striped photo tee: originally $42.50, on super clearance $5 - I was ready to spend $20 on this tee (and I did in an online order). When I went to return a bunch of other stuff, I found this one for $15 - 60% - 15% student discount. For $5 I was tempted to buy a bunch more (you wouldn't believe how huge the stack of tees was!).
3) JCF endless summer tee: originally $39.50, on sale $15 - I almost bought this tee from J. Crew last year, but it was final sale and I wasn't ready to spend almost $30 on it (including shipping). When I saw it on J. Crew Factory's website, I bought it right away.
4) Joe Fresh x JCP linen tee: originally $29, w/coupon $15 - I'm on the fence about this one. I love the idea of it, but it feels meh in person. Maybe pairing it with a pop of color would do the trick? [EDIT: RETURNED]
5) Pikachu tee: originally $20, on sale w/coupon $2 - I have wanted a Pikachu t-shirt for years. I can't tell you how many times I almost bought one from Hot Topic, but the $25 price tag dissuaded me time and time again. When JCPenney sent me a $10 mailer (and I couldn't find anything else in store that piqued my interest), this tee was mine.
6) JCF teddie sweater: originally $64.50, on clearance $19 - Impulse purchase, not gonna lie. I'll make it work... though I may have to wait until September for it to cool down enough first.
7) JCF eyelet sweatshirt: originally $79.50, on clearance $24 - Another impulse purchase. At least I'm honest, right? It'll be easy enough to wear with jeans or a skirt. [EDIT: RETURNED]
8) The Limited shirtdress: originally $80, on sale w/gift card $16 - Summer employment in a hot climate means lightweight clothes. This shirtdress fits the bill for comfort, staying cool, and looking work appropriate. I'm just not sure whether I need another dress that will inevitably get neglected in the fall and winter months.  [EDIT: RETURNED]
9) Target floral print scarf: originally $15, on clearance $5 - I had my eye on this scarf and was just waiting for the day that it would get down to a reasonable price. In the mean time, I saw this alternative from Target on clearance for $8 and waited for it to get down to $5.
10) Target tribal print scarf: originally $15, on clearance $5 - When I found the above scarf, I was tempted by a bunch of other $5 scarves. I couldn't resist this one. [EDIT: RETURNED]
11) Target embellished sandals: originally $23, on sale w/coupon code + gift card $7 - I probably don't need another pair of Target sandals, but the few pairs I have from years ago are on their way out. These will get plenty of wear, so I'm fine with the purchase.
12) JCF amelia flats: originally $98, on clearance $25 - I'm not sure whether I'll be keeping these or not, just because I'm not sure how much wear I'll get from them. If you have any ideas on how to style them, send those ideas my way!
13) JCF oxford shorts: originally $44.50, on clearance $13 - My mom bought these same shorts for me in yellow last year. I love them, and they work better for my body now than Old Navy's twill shorts.
14) JCF geometric jacquard skirt: originally $88, on clearance $26 - I was really tempted to buy this when I first saw it, but couldn't justify spending almost $100 on a skirt. By the time it dropped (to $60), it was final sale. I gambled on this one since it was final sale when I bought it online, but I can see myself wearing it enough in the future. (A little hemming might be necessary.)
15) JCF jersey maxi skirt: originally $69.50, on clearance $21 - I've wanted to add another maxi skirt to my collection for a long time, and I see myself more likely to wear this one than any bold color instead. The only downside is its length. I guess when the description says "falls to floor", it really means "falls to ankles". [EDIT: RETURNED]
(not pictured) JCF dragonfly necklace: originally $57, on super clearance $10 - I wanted both this necklace (see it here) and this one (in coral), but I decided on the former because I saw myself wearing it year-round.

Obviously I went overboard this month. I got some early birthday cash, and I honestly just wanted to give my closet a face lift. I'll write more about that in the future.

I also blame this month's budget on J. Crew Factory's sales. I placed a huge order earlier in the month, and believe it or not, I've already returned a lot of things from that order, including these floral flats, these canvas flats, this tweed skirt, and this square scarf. (The floral flats were too big, and the canvas flats were just meh. The tweed skirt had too much glitter/shimmer in it. I had high hopes for the square scarf, but when it arrived, it was navy. I thought it was black. I already have a navy scarf, so I passed. (Part of me is still hoping that this scarf will go on super clearance some day.))

Hopefully school will keep me busy next month so I won't do as much damage. How did you do this month?