I recently realized something: I spend a fair amount of time on Pinterest. I pin, I collect pins, but I do nothing with the pins. Since this month's challenge calls for putting an end to neglecting the things we shouldn't, I decided that I should quit neglecting my Pinterest boards.

I should also quit taking pictures immediately after growing a food baby. Thanks, Chipotle. 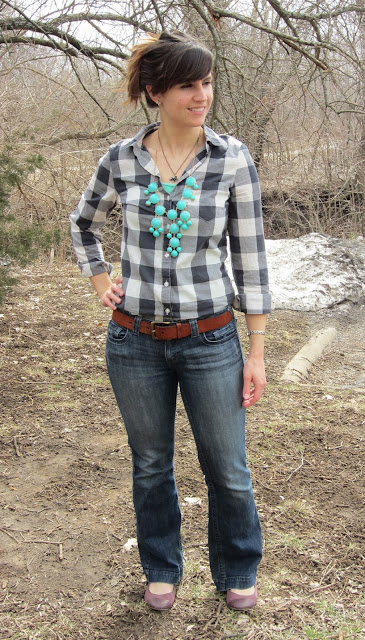 
I admit there is nothing particularly fascinating about this outfit. I was, however, quite fond of the black, white, and turquoise together. Had I just been going to class today, I would have swapped out the flats for wedges to match the belt. I opted for flats since I had so many errands to run. Days like today made me really wish I had a decent pair of black flats. I was considering wearing mine, but they are so far past due that I really should just throw them out. What are the best pair of black flats you've ever worn?


No Longer Neglecting: Pinterest (this pin in particular, from Robyn at xoxo cleverly, yours )
Reason for Neglecting: I don't know. If you neglect your Pinterest, I'd love to hear why!
Posted by kate @ a journey in style at 3/15/2013