Pass It On: Camo Pants

Picking out shoes has always been one of the most time consuming parts of getting dressed for me. I decided to wear my camo pants again for Take One, Pass It On, but I couldn't figure out what shoe to wear. I searched on Google and Pinterest to get ideas and found that 99.9% of the women wearing camo pants were wearing high heels. I definitely plan to try that pairing in the spring, but what is the best pairing for winter weather? 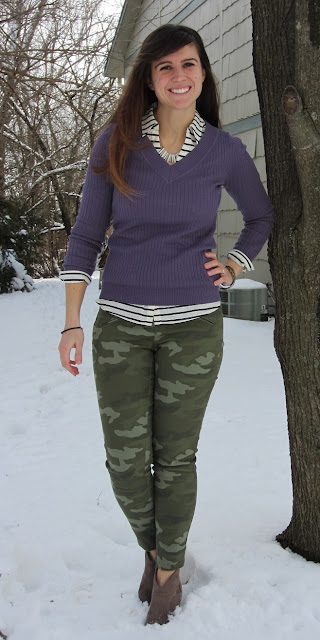 I went to campus in booties, but brought my flats just in case I wanted to change into them there (which I ended up doing). I considered wearing (tall) boots, but something just felt off. What do you think? Should I have been part of the 99.9% and just worn a nude heel? Which shoe would you wear bearing in mind that there are hills of snow everywhere around me?

Also, the lecture hall I have to go to requires taking many many stairs. Will the amount of stairs you encounter (or the walking you do in general) play into what shoe you end up wearing for the day? 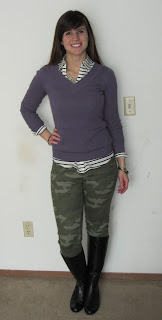 As mentioned: my Take One, Pass It On item: camo pants, seen yesterday. 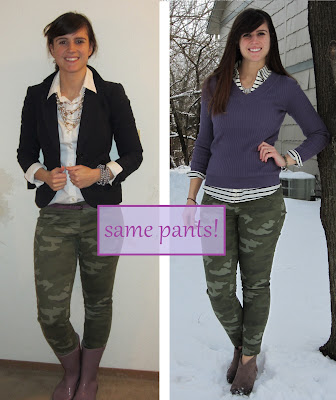 [Linking up with The Pleated Poppy, Because Shanna Said So, Rolled Up Pretty, Diaries of a Bargainista (Alisa and Sarah), and Style Elixir]
Posted by kate @ a journey in style at 2/27/2013