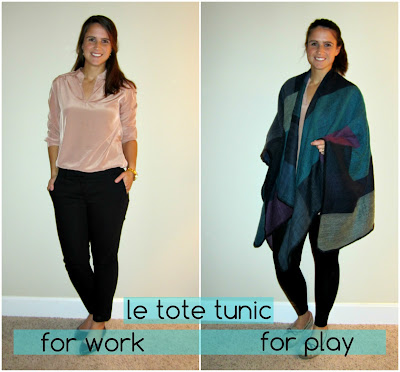 I received this tunic in my first tote, but it didn't fit, so I asked Le Tote to send me the next size up. I wore it to class last Tuesday (for work) and out running errands on Wednesday (for play). I didn't manage to take pictures outside because it was dark by the time I was done for the day on Tuesday. And then it rained all day Wednesday. And all day Thursday. And Friday. And most of Saturday. So hooray for indoor photos! 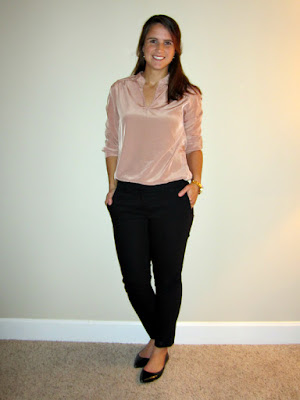 Sizing up made the tunic so much better. I almost considered thinking about possibly buying it, but it was dry clean only and it wrinkled easily but was hard to de-wrinkle. So I just wore it a bunch last week. My favorite part about the tunic was that it could be dressed up for class by tucking it in (as seen above) but that it could also work for more casual outfits. It goes past the bum, so it can easily be tossed on with leggings (as seen below). 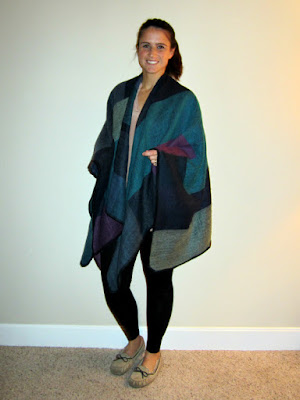 In my third tote, I received a cape. I requested it because I had never worn a cape before. Although I reported that it would be the last time I would probably ever wear a cape. I mostly felt awkward in it. But after seeing this colorful patchwork cape, I thought I'd give it another shot. I loved the colors of this second cape, but felt far more awkward in it. Outside, the wind kept blowing it up and I had a hard time holding it down. Inside the grocery store, I felt like I was taking up so much space. My husband teased me for wearing a blanket to the store, and although I set him straight ("It's not a blanket, it's a cape") I couldn't help but feel like I really was wearing a blanket. I'm not sure I would have felt any differently had I actually thrown a blanket over my shoulders.

Ultimately I'm enjoying Le Tote more, now that I put slightly more thought into what I'm requesting and erring on the side of caution and sizing up. I'm also trying to wear the items I love a few times before sending the tote back. I really hope that you'll consider giving Le Tote a shot! If you use my referral link, you can get your first month for $25 (50% off!) and I can put $15 towards my next tote. I also can't help but think a month of Le Tote would make an awesome gift this time of year :) 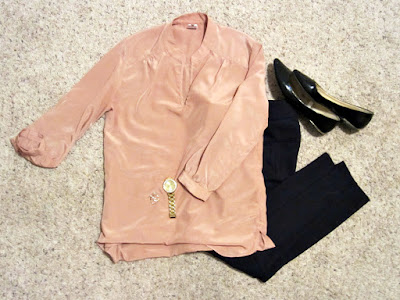 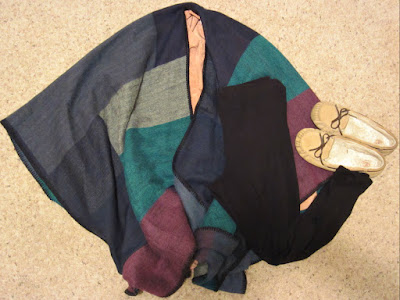