Kimmie tagged me for Five Things, so here I am, bearing my all (haha)

1. My name is Katarina.
I was born in Serbia and shortly thereafter moved to the states. I started going by 'Kate' because I wanted a more American sounding name. I tried introducing myself as Katarina when I went off to college, but it was weird. Only my family, my husband, and some close friends ever call me Katarina.

2. Inconsiderate people make me angry.
I'm relatively down to earth weird and awkward, but my blood boils when people don't use their turn signals, when they stand in the middle of a grocery store aisle, and litter/don't pick up after their dogs. (Clearly none of them subscribe to Kant's moral theory.) Doing these things shows that you either are oblivious to others around you, or you just don't care. Either way, you suck. The same goes for people who don't greet cashiers, baristas, and waiters and just demand that they are taken care of. These people aren't your slaves, for crying out loud. They're not robots, either. Treat them with some respect! Arg.

3. I used to be obsessed with the Backstreet Boys.
Seriously obsessed. I spent my allowance on Backstreet Boys posters, books, stickers, and anything with their faces on it. I memorized their lyrics and their biographies. I recorded their TV appearances (using the VHS set, of course). I was convinced that Brian and I would get married some day. In 6th grade, we were learning about the heart in science class, and I knew Brian had a hole in his heart. I wanted to ask my teacher about the condition, so I said "I have a friend who has a hole in his heart". I was teased for referring to Brian as my friend up until senior year of high school.

4. I love animals.
I love my dogs and my cat, but I really just love all animals. They fascinate me; I admittedly have spent way too much time trying to figure out what their states of cognition are like. My husband and I went to three zoos this year, and one aquarium (despite having a love/hate relationships with the zoos-- I really wish they gave more space and food to the animals. Some zoos do a great job with the primate exhibits, but give barely any room for the big cats to romp around -- and I won't even begin to talk about how emaciated some of them are. Zoos are a great way to learn about animals and see what we lose (and who we kill) by destroying wildlife, but it is necessary that the goal of the zoo is not to make a profit, but rather to provide a sanctuary for the animals.) My favorite animals are bears, because they are cute and ferocious. 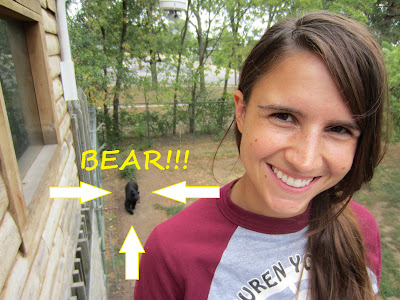 5. Mascara is the only makeup I wear on a regular basis.
(If you want proof, I'll post before and after close ups.) I have a tube of mascara in my purse, backpack, and on my office desk. (Turns out I have Blistex chapstick in the same places.) If I apply anything more than mascara, it will be eyeliner, maybe eyeshadow. When I'm feeling unpretty I'll put on foundation and blush. I just don't see a significant difference, so it doesn't seem worth the time or energy. (Maybe this means that I don't know how to apply makeup? If you have product recommendations or tutorial suggestions, I'd be happy to hear!)


I'm tagging:
Andi at Just Another Smith
Ashley at The Cream to My Coffee
Heather & Kayla at HK Style Journey
Heidi at Literate & Stylish
Rita at Coast With Me 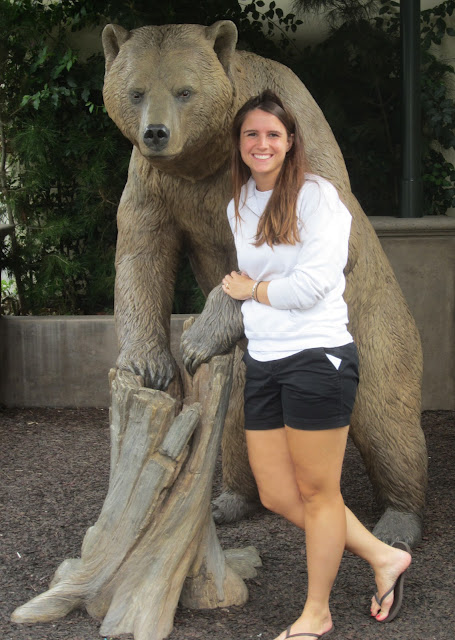 It's my dream to be this close to a real life bear.

Email ThisBlogThis!Share to TwitterShare to FacebookShare to Pinterest
Labels: about me