A few weeks ago, I cut my hair to get a side-swept bangs look. Unfortunately, I couldn't figure out how to style them to keep them out of my eyes, so I ended up bobby-pinning them back most of the time. I finally decided to cut my bangs all the way. 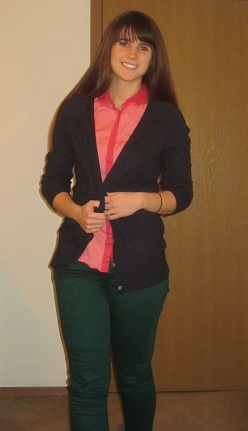 Today's look is brought to you by Lindsay of Lindsay J Everyday. When I saw her pair navy, blush, and hunter green together {here} I knew immediately it was a look I would be replicating. I subbed out blush for something with a little bit more pop.
She was actually the one who inspired me to cut my bangs. The funny thing is that I had bangs all the way up until 8th grade when I wanted to grow them out (because all of the popular girls had grown out their bangs). One time in undergrad I got my bangs cut, but the stylist cut them so ridiculously short, I pinned them back until they grew out again. I think I like them, but I can't decide if it's just because it's a new look, or if it's because I feel like I can hide behind them. What do you think about bangs?

[Linking up with The Pleated Poppy, Rolled up Pretty, and Because Shanna Said So]

I have this problem where I buy something and it takes me forever to wear it. Take this vest, for example. My Mom got it for me on Black Friday last year, and this is only my second time wearing it {debut here}. I also got these wedge sneakers a while ago, but am wearing them for only the second time {debut here}.

I really can't explain the reason for the delays, although I'm inclined to say it has something to do with difficulty in styling. Do you have any ideas on how to style the vest and/or wedge sneakers? 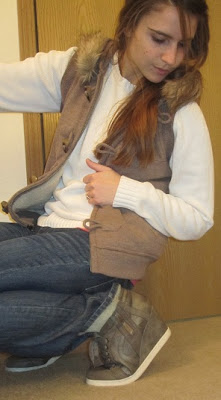 Anyway, I'm still not sure exactly how I want to wear this vest, and whether it's best left open or closed. Which way do you prefer? And do you have any ideas on how to style the vest and/or wedge sneakers?

I know, I know. I've been MIA for far too long. I apologize. I was so swamped with school-related work last week, and then when I finally reached the finish line, I collapsed. I needed to recharge my batteries before jumping back in to blogging. I hope you can understand :-)

I also haven't been posting because I've only been wearing yoga pants and a tshirt. I finally wore something else today because my husband and I went to see The Hobbit.

I had planned this outfit weeks ago, after seeing a colleague wear a coral and grey striped sweater. I loved the way the colors looked together, so I decided to build an outfit around that. I've been finding a lot of color inspiration lately, and have been more interested in trying to push the limits of my closet. I hope 2013 will be filled with lots of new creative outfits and only a few new purchases!


Which look do you like more? Vest open or closed?

Getting More from a Sweater

Have you ever bought a necklace and waited months to wear it? Yeah, me neither.


Do you know how I know my style has evolved? In the past, I (would) have worn this sweater by itself. Flash forward to now, and I layer it over a (light) button-up shirt, and add a necklace. Have you noticed your style evolve in any drastic ways recently?

I took an exam this morning, which means that now I have one last term paper and then I am done!!
(For the semester, at least!) The finish line is so close! 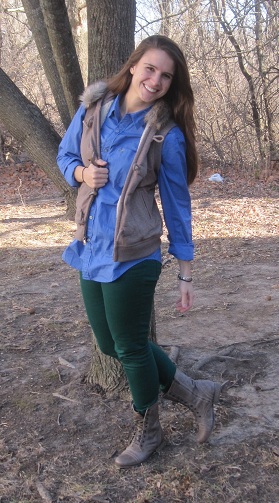 I can't tell you why, but I am on a button-up shirt kick lately. I've exhausted most of mine, so I decided to raid my husband's side of the closet. (And I love the way this shade of blue and green go together, and I have nothing in my closet this shade of blue.) In an effort to avoid falling back on the button-up shirt and cardigan combo, I opted for the vest instead. I haven't featured it on this blog mostly because I don't know how to wear it. How would you style this vest?

Last night, I gave my closet a bit of a makeover.

I've been keeping track of what I wear by turning hangers around (pointing out towards me, rather than pointing towards wall). It didn't help as much as I thought it would, because I kept staring at the same collection day in and day out.

So, I took a new approach.

Today I am featuring one of those tops from the left side of my closet.


I should mention that I was really tempted to wear a button up shirt and cardigan today, again, but I refrained. I'll probably be in the library all day tomorrow, though, so I can't make any promises not to :P
Posted by kate @ a journey in style at 12/07/2012 8 comments:

I guess I have a go-to look for writing term papers. I had another one due today, so I stayed up quite late last night/this morning. Even though I really, really wanted to, I just couldn't bring myself to wear sweatpants (or yoga pants) to school. Since my next term paper isn't due until Wednesday, I'll try to be more creative tomorrow... or at least refrain from wearing another button-up shirt and cardigan.

[Do excuse the crazy hair-- I was playing with the dogs right before these photos were taken.]


On a side note, I have a problem in the cold weather season. My feet get cold easily, so I don't like wearing flats. However, some days I just don't feel like wearing boots (especially when I have flare jeans on). If I don't want to wear a shoe with a heel, what is left? What do I wear on my feet then? Should I just wear boots under my jeans?
Posted by kate @ a journey in style at 12/06/2012 3 comments:

Out with the New, In with the Old

I have a confession to make. I made a handful of online purchases last month, and the items are sitting on a shelf in my closet. They still have their tags on, just waiting to be worn, but for some reason, I can't bring myself to wear them. I think it's a sign that I was more excited about the find than the clothes themselves. So, after I'm done writing term papers, I'm sending them all back. {Out with the new.}

In the mean time, I'm going to try to learn to work with what I have. It's really a shame that I've had this shirt for nearly a year and have only worn it maybe three times. There are some other items that I haven't worn this semester yet, so I'm going to try to wear those things before the new year. {In the with old.} 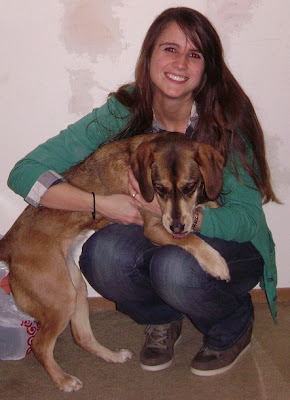 I am sporting something new today (shoes are a completely different story than clothes, right?)... wedge sneakers! Sorry I was in a rush and didn't take better photos, but I'm a big fan of them. I honestly can't picture myself wearing them with anything fancy, but when I opt for a casual look like this, they are ideal.
Posted by kate @ a journey in style at 12/05/2012 11 comments:

Yesterday, I forgot to give a shout out to those of you who wished me well for my term paper. Thank you! The paper got done and turned in on time, yay. Unfortunately, I have another one due Thursday, and an exam and another term paper due next week. At the end of every semester, I ask myself why I keep putting myself through this. Then I remember, I only have two full semesters of coursework left, and the dissertation stage will be here before we know it.

I put on a sweater and jeans today because it was going to be a long day, and I thought I wouldn't be able to get a photo in anyway (why waste an awesome outfit when there's no camera available?). When I got home tonight, my husband asked me whether we should try taking my picture with another camera. By some miracle, his worked -- in the loose sense.. the screen stays black and the viewfinder is fogged up.

Sorry my outfit is such weak sauce today, but at least I have a mildly amusing story for you!

Today I spotted a girl on campus wearing some awesome wedge sneakers. I went up to her, told her I liked them, and asked her where she got them.

Silly girl, I know what ASOS is.

Too bad I hadn't thought to wear my wedge sneakers today. I bought a pair on impulse recently from Kohl's, but have yet to wear them. Maybe I'll just bite the bullet and wear them tomorrow... stay tuned! (Hopefully the semi-functional camera will still be able operating tomorrow!)
Posted by kate @ a journey in style at 12/04/2012 10 comments:

The Day the Wind Knocked Over My Camera

Have you ever had one those days where things are going well, until they're not? Today is one of those days.

I had a yummy breakfast, a productive morning, the weather was great, etc... and then when I was taking my outfit pictures, the worst thing that could happen to a blogger happened to me.

The wind knocked over my tripod.

Now the lens of my camera is stuck (open).

I got this camera for Christmas last year, so I've had it for less than a year, but I'm not convinced that Canon will consider it under warranty since it was "dropped". (It's a Canon PowerShot Elph 300 HS for reference). Do you have any experience with Canons? Do you know what the one-year manufacturer's warranty covers?

I should really have learned my lesson by now. This is my second Canon, the third for the family. My old Canon (PowerShot SD780 IS) had a lens error and won't open. My husband had the same model, and his won't take pictures. Canon PowerShots take such nice pictures, but they are doomed from the beginning.

So, I might not be able to post for a while (and no, I don't have an iPhone). 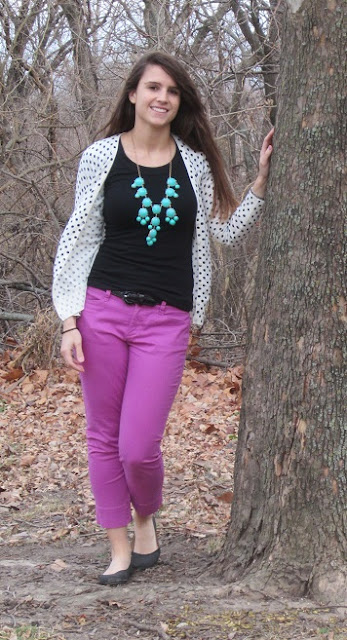 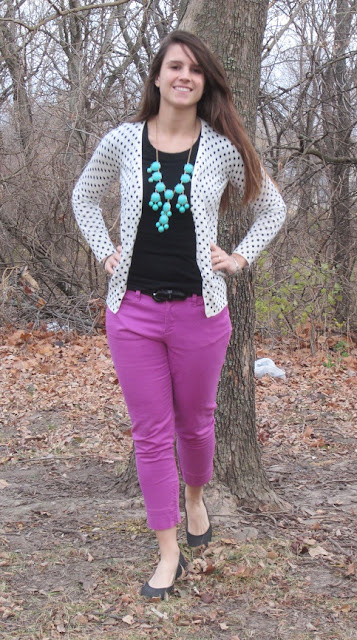 In other news, on a whim, I cut my bangs this weekend (see above picture).

Slightly humorous moment of the morning: I was debating between wearing the turquoise bubble necklace, or a pink one (same color as my crops), so I asked my husband for his opinion. When I held up the pink one, he said "wow... that's a lot of pink." I took that as a sign that I should go for turquoise. (I think it was a good decision.)